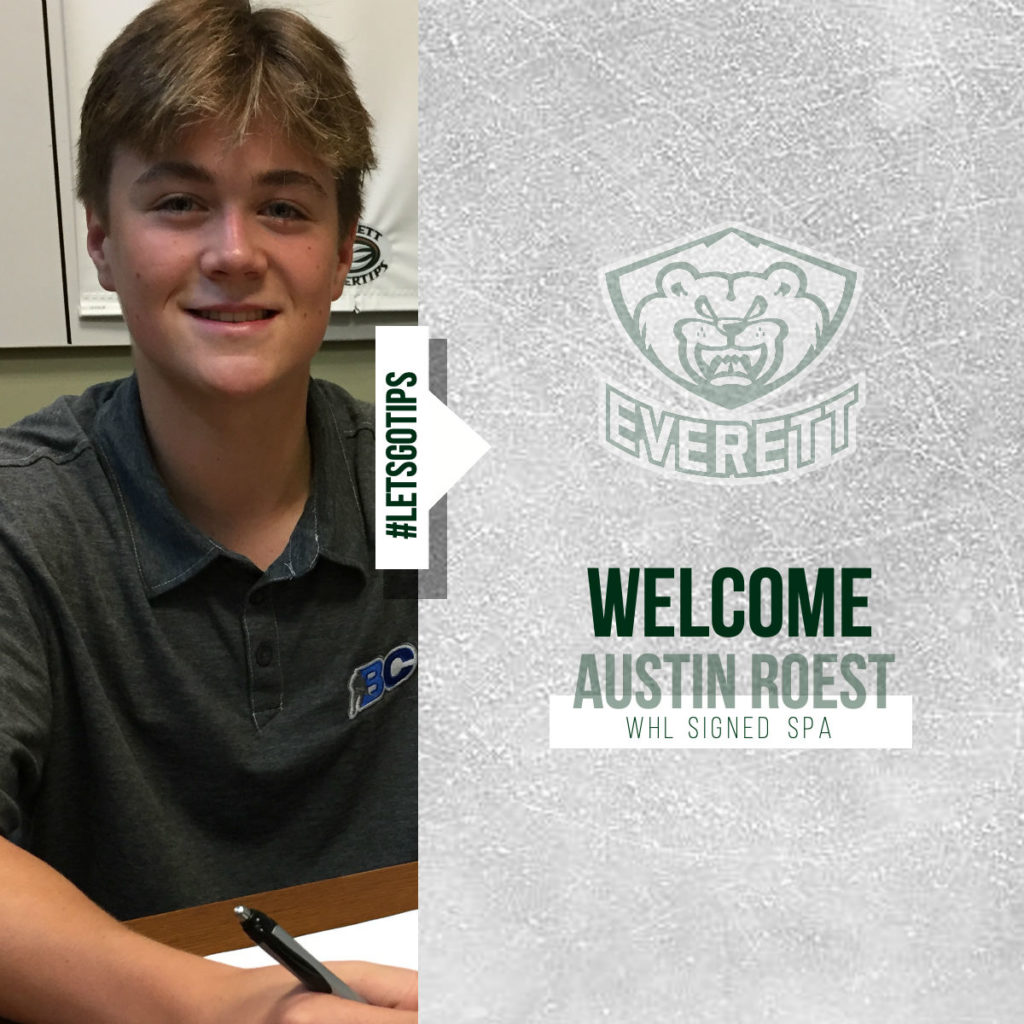 “With Austin, you get a combination of a driven approach, refined skill, and a terrific support system with NHL ties which excites us to no end about his commitment to the Everett Silvertips and the Western Hockey League,” said Davidson. “He’s worked extremely hard to make a great impression in training camp and over the last season with the North Zone Kings, and at the B.C. Cup, showcasing his quickness and intelligence as qualities that identify as a great fit as a Silvertip. As his father, Stacy, laid out a great road map to follow as a hockey player at an elite level, we’re looking forward to Austin’s next steps in development for this upcoming season.”

“Austin is an exciting player who models what we’re looking for,” said Silvertips head scout Mike Fraser. “He delivers a fast, quick, and highly intelligent brand of hockey. His ability to make quick decisions with and without the puck always seem to place him in the right spot and he improved greatly as training camp went along. His family history with the game goes hand-in-hand with success, and we’re excited to have him set as a big part of our future.”

Roest last season skated with the NorthZone Kings (Bantam AA), compiling 92 points (40 goals) across the entire year, including a program leading 38 points (19g-19a) and 19 goals in 18 regular season games. At the Ultimate Hockey Bantam Showcase, the native of Coldstream, British Columbia led the Kings with 19 points (8g-11a) and 11 assists in 7 games while tying the program lead in playoff scoring with six points (3g-3a) in four games.

The 2004-born forward was selected by the Silvertips in the third round (64th overall) in the 2019 WHL Draft and skated in the Silvertips Prospects Game, scoring a pair of goals on Aug. 24.

Roest’s father, Stacy is current serving as assistant general manager of the Tampa Bay Lightning of the National Hockey League, skated in 244 career NHL games as a forward with the Detroit Red Wings and Minnesota Wild with 28 goals and 76 points, had 286 points in 309 career AHL games with Adirondack and Grand Rapids, and competed for four-plus seasons in the WHL with the Medicine Hat Tigers while posting 409 points in 290 games while earning WHL (East) First Team All-Star honors in 1993-94.

“It’s a feeling that I’m still soaking in right now, but also an incredible one to become an Everett Silvertip,” said Roest. “Training camp was amazing and it showed a first class organization along with the players, staff, coaches, and others who make you feel welcome. I’ve taken pride in a playmaking and hard skating type of game that can help deliver points. So it’s important for me this season, at the next phase of my career with the Okanagan Rockets, that I work on improving in those areas along with winning a championship to prepare for what’s ahead in Everett. I can’t wait to get started.”

Roest is scheduled to compete this season with Okanagan Rockets (minor midget) in Kelowna, B.C.

The Silvertips return to play this Saturday against the Kelowna Rockets, 3:30 p.m. in a pre-season tournament hosted by the Vancouver Giants. The Silvertips will launch the 2019-20 season and raise their seventh U.S. Division banner to the rafters on Opening Night, Sept. 20 at Angel of the Winds Arena against the Tri-City Americans at 7:35 p.m.

The Tips full regular season schedule offers full 34-game season tickets, 22-game, and 14-game plans for as little as $215 total per seat. Deposits for $50 will secure a seat for the 2019-20 season, available at www.everettsilvertips.com/season or by calling (425) 252-5100 during normal business hours (Monday through Thursday during the offseason, 9am to 4pm). Seven game packs are now on sale.

The Silvertips will launch the 2019-20 season and raise their seventh U.S. Division banner to the rafters on Opening Night, Sept. 20 at Angel of the Winds Arena against the Tri-City Americans at 7:35 p.m.