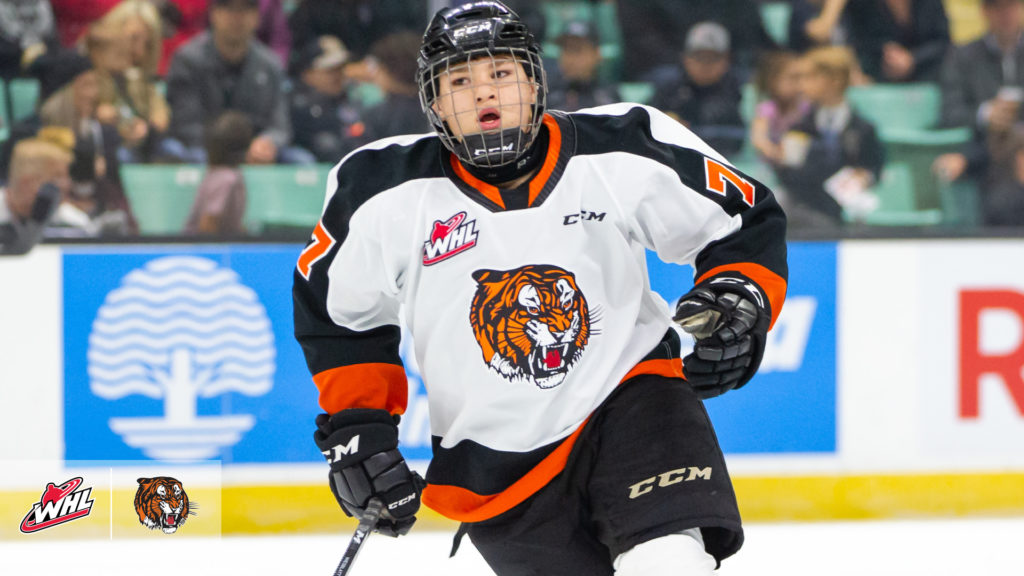 Medicine Hat, AB – A name that Medicine Hat Tigers fans will hopefully become familiar with in the future is Oasiz Wiesblatt.

Wiesblatt was drafted by the Tigers in the first round, 12th overall in the 2019 Western Hockey League (WHL) Bantam Draft. During the shortened 2019-20 season, the 16-year-old Calgary native got his first taste of WHL action by suiting up for the Tigers when they visited Red Deer, November 15, 2019. The Tabbies won the game 4-3 in a shootout.

“Honestly, there were so many different emotions,” said Wiesblatt of his WHL debut. “Asking my brothers what it is like to play at that top level and getting feedback from them was a blessing. Walking into the room was so surreal and seeing how it’s a first-class organization. Then putting on my gear and getting to see what the WHL is really about was amazing. I still remember every part of the game in the back of my head, it was truly an honour and I will forever be grateful for the opportunity I got.”

He is the younger brother of Ocean (Portage Terriers – Manitoba Junior Hockey League), Orca (Calgary Hitmen) and Ozzy (Prince Albert Raiders) and before his debut, he turned to them for advice.

“The biggest thing Orca and Ozzy told me was to just play my game and do the things that got me to where I am today. They said it’s a big step but most importantly to have fun with it,” said Wiesblatt.

Hometown Hockey did a feature on the Wiesblatt family in December.

Kim White was born deaf, and later gave birth to her 5 children. Along the way they struggled financially, but she sacrificed so her 4 boys could continue to play hockey. This is a story about hope, courage, community and a Mother’s love.

“I learned a lot and had so much fun,” said Wiesblatt of his time with the Buffaloes.

One highlight of his season with the Buffaloes was winning the prestigious Mac’s Midget AAA Tournament where Wiesblatt scored two goals and collected three assists in four games played.

“It was a great learning experience, I worked so hard all year and when I was playing in those Mac’s tournament games, I worked so much harder because I wanted to win,” said Wiesblatt. “Scoring some of the goals for my team and assisting some others meant so much. I really left everything I had out on the ice.”

The Buffaloes finished the 2019-20 season in first place of the Chrysler Division with a 22-5-5 record and they had won the division finals by sweeping the Calgary Flames in three games in the playoffs. Wiesblatt collected 21 points (7G, 14A) in 29 games during the regular season and he chipped in three points (1G, 2A) in six playoff games. 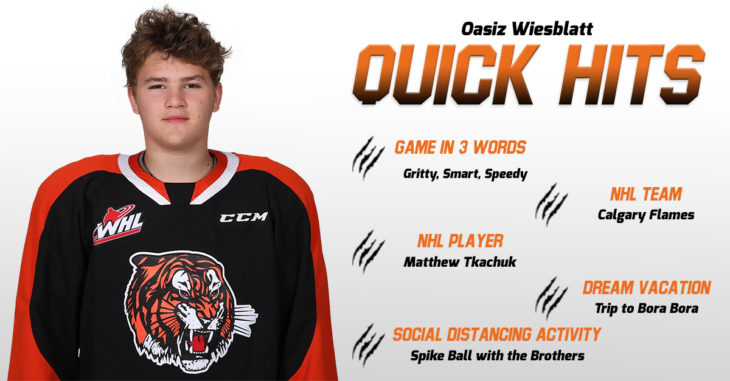 Once their seasons ended, Wiesblatt brothers returned home and they set up a gym so they can work out in the garage and stay fit for next season.

“My schedule so far this summer has consisted of waking up, working out with all the brothers, eating after we workout then playing spike ball for a couple of hours. It gets pretty competitive with all of us,” said Wiesblatt who claims that usually, his team with oldest brother Ocean wins.

During this offseason, Wiesblatt is focusing on improving his speed and working on his shot in hopes that he will be ready to play for the Tigers next season.

WHL commits to season for WHL players
2 weeks ago