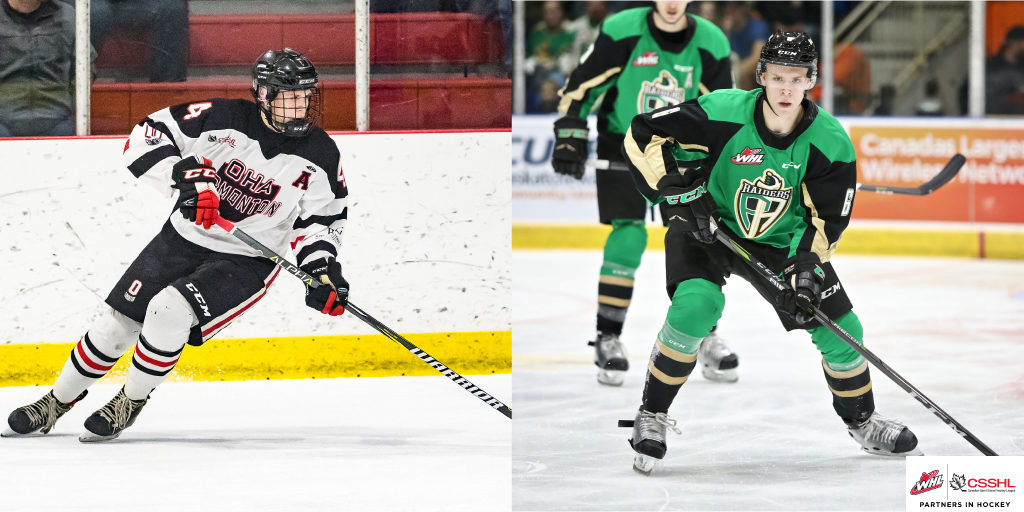 Calgary, Alta. – The CSSHL Alumni Spotlight for the month of March is defenceman Kaiden Guhle of the Prince Albert Raiders. A product of Sherwood Park, Alberta, Guhle is an alumnus of the Okanagan Hockey Academy Edmonton where he played two seasons with the CSSHL program. Launching in 2015, OHA Edmonton is the fourth academy under the Okanagan Hockey Group family.

Prior to leaving for Edmonton to train and study with OHA, Guhle played his first year of Bantam with the Sherwood Park Flyers of the AMBHL, where he produced 24 points (3G-21A) in 35 games. Following his season in the AMBHL, Guhle went to the OHA Edmonton Bantam Prep off the CSSBHL in preparation for his WHL Bantam Draft season. Guhle served as captain for the club and scored 40 points 17G-23A) in just 30 games and was named CSSHL Top Defenceman in the Bantam Prep division. Following his freshman campaign with OHA Edmonton, Guhle was selected first overall by the Prince Albert Raiders in the 2017 WHL Bantam Draft.

Guhle’s production did not slow down when he made the jump to Midget for the 2017-18 season with OHA. The 6-foot-2 defenceman registered over a point-per-game with 39 points (14G-25A) in 35 games and added a goal and an assist in three playoff games. For the second consecutive year, Guhle was awarded the CSSHL Top Defenceman award in his respective division, along with taking home the honours of Top Freshman. Guhle was a member of the Team Alberta squad that took home silver at the 2017 WHL Cup. Serving as on of the team’s assistant captains, Guhle led all tournament defensemen with 9 points (5G-4A) and was named to the 2017 WHL Cup All-Star Team. In addition to his impressive season, Guhle played in eight games with the Prince Albert Raiders, recording one assist an even plus-minus rating.

Guhle had no shortage of excitement in his first full season with the Raiders, a season in which the Raiders captured the Ed Chynoweth Cup for the first time since 1985 and a trip to the 2018 Memorial Cup. In 65 regular season games Guhle put together 17 points (3G-14A), while adding an additional three assists in the team’s historic 23 game playoff run. Along with a full workload on the Raiders backend, Guhle captained Team Canada Red at the 2018 World Under-17 Hockey Challenge in New Brunswick. Guhle collected three assists in six games, but Team Canada Red fell short of capturing a Bronze medal, losing 4-3 to Sweden in a shootout.

With his exceptional rookie season in his rear view and a good showing at the U18 Summer Camp, Guhle was named to the leadership team ahead of the 2019 Hlinka Gretzky Cup in Czech Republic. Guhle recorded one assist in a tournament that saw Canada took home a Silver medal after a 3-2 loss to Russia in the championship game.

Guhle more than doubled his 2018-19 point total this season with 40 points (11G-29A) in 64 games before the WHL season ended early due to the COVID-19 pandemic. NHL’s Central Scouting Midterm Rankings had Guhle listed as 7th among North American skaters and the next best North American defenseman behind Erie Otters Jamie Drysdale. With his strong sophomore season and impressive showing at the Kubota CHL Top Prospects game, Guhle hopes to hear his name called early at the 202 NHL Draft in Montreal.