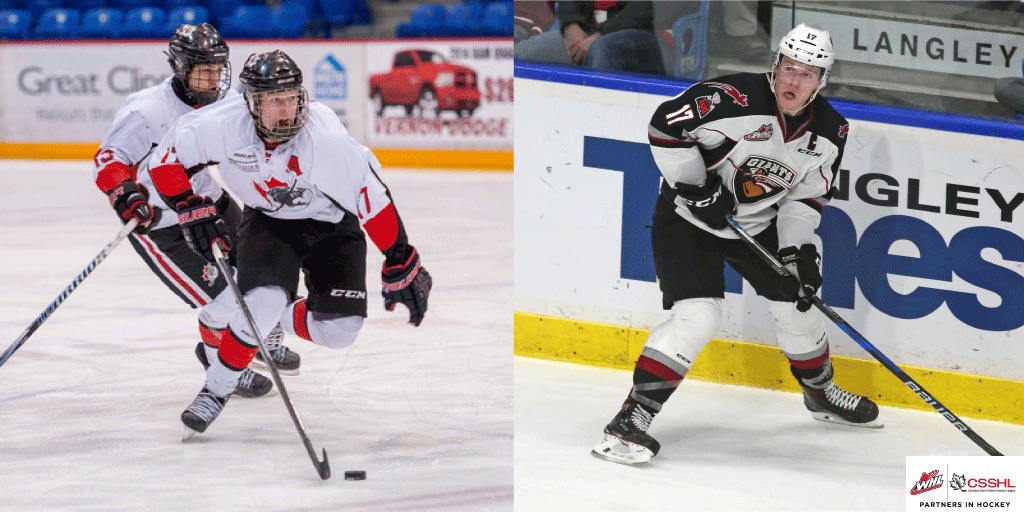 Calgary, Alta. – The CSSHL Alumni Spotlight for the month of February is Tyler Benson, alumus of the Pursuit of Excellence Hockey Academy. Benson is currently in his second full season with the Bakersfield Condors, American Hockey League affiliate of the Edmonton Oilers. The Edmonton, Alberta native was drafted first overall in the 2013 WHL Bantam Draft by the Vancouver Giants after a record-breaking season with the SSAC Lions. During his draft year, Benson recorded 146 points (57G-89A) in just 33 regular season games, breaking the AMBHL scoring record by an impressive 15 points.

Following his draft eligible season, Benson committed to the Pursuit of Excellence Hockey Academy in Kelowna, BC where he would play for the Midget Prep club. Benson made the decision to move away from home and attend the POE as he felt it was the best place for him to develop his game and prepare him for the jump to the Western Hockey League. In his lone season with POE, Benson registered 35 points (15G-20A) in 15 regular season CSSHL games, along with 40 points (14G-26A) in 21 NAPHL 18U league games. Benson’s efforts earned him CSSHL Freshman of the Year, as well as NAPHL 18U First All-Star Team honours. The 2013-14 campaign for Benson was also highlighted with a silver medal at the U17 World Hockey Championship with Team Canada and a gold medal at the Western Canada U16 Challenge Cup with Team Alberta. Throughout the 2013-14 season, Benson suited up for 7 games with the Vancouver Giants, but held off the scoresheet in his appearances.

In his rookie season with the Giants, Benson put up 14 goals and 31 assists in 62 games, earning him a spot on both Team Canada’s U17 and U18 teams. Team Canada won bronze at the 2014 World U18 Championship, with Benson contributing one goal and three assists in the seven games. Benson competed internationally once again in the summer of 2015 as a member of the Gold Medal winning Team Canada at the Ivan Hlinka Memorial Cup.

The Giants named Benson team captain prior to the start of the 2015-16 season and held the captaincy for the remainder of his time with the club. Although he was limited to just 30 games due to injury, Benson finished the year with nearly a point per game with 28 points (9G-19A) in 30 games. Originally projected to go in the first round of the 2016 NHL Draft, Benson saw his stock drop due to injury and limited play. Benson was drafted in the second round, 32nd overall to his hometown Edmonton Oilers in the 2016 NHL Draft. Following the summer of the NHL Draft, Benson returned to the Giants where he would remain for the next two seasons. Benson registered over a point per game in both the 2016-17 and 2017-18 seasons and at the conclusion of his final year in the WHL, he joined the Bakersfield Condors of the AHL where he added three helpers in five games.

Perhaps his first full, healthy season in a few years, 2018-19 saw Benson find his game in the American Hockey League after a strong showing at the Oilers main camp. With 61 points (15G-51A) in 68 games, Benson not only led his team in points, but also finished second in AHL rookie scoring and had the most assists by an AHL rookie. In addition to his rookie scoring accolades, Benson was named to the AHL All-Rookie Team and the AHL Second All-Star Team.

Benson has started this season much like his last, among the top scorers of the Condors with 36 points (9G-27A) in 45 regular season games. His consistent performance in the AHL earned him a call up to the Oilers for a shot with the big leagues. Benson suited up for his NHL debut on February 6th, 2020 when the Oilers hosted the San Jose Sharks. Since his debut, Benson has played seven games with the Oilers and recorded his first NHL point on an assist in the Oilers 4-3 win over the Carolina Hurricanes on February 16th, 2020.