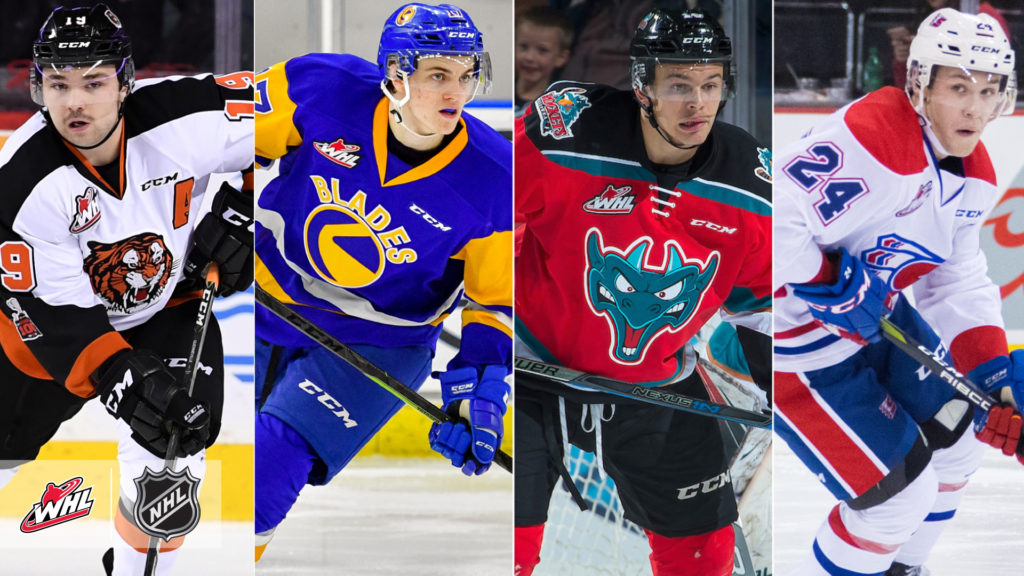 A total of 31 current and former WHL players have received an introduction or more experience at the professional hockey level as NHL Metropolitan Division teams held their annual development camps.

A break-down by team shows the WHL players listed alphabetically on each team by position and  associated with the most current WHL team they’ve played for.

The lone player with WHL ties invited to the Blue Jackets’ development camp, Fix-Wolansky has become a rising star in the Blue Jackets’ prospect pool. In the 2018-19 WHL Regular Season, Fix-Wolansky recorded 102 points (37G-65A), becoming just the second Oil King to ever reach 100 points in a single season. He ultimately finished tied for fourth in regular season scoring. The Blue Jackets have other talented WHL players on their roster already, including Ryan Murray, Seth Jones, Oliver Bjorkstrand, and Brandon Dubinsky.

The Devils will hold their annual development camp from July 9-13 at the RWJBarnabas Health Hockey House at Prudential Center with a quartet of current and former WHL players participating. The group is led by Chiefs’ co-captain Ty Smith, who finished fourth in scoring among WHL defencemen in the regular season with 69 points (7G-62A) in 57 games. A WHL Champion with the Broncos in 2018, Sissons recently completed the first season in the professional hockey ranks. Both drafted prospects of the Devils, Popugayev competed for the Moose Jaw Warriors and Cougars during his time in the WHL while Schmid played with the Hurricanes.

This year's roster has 37 players, that includes 23 forwards, 10 defensemen and four goalies.

Four current and former WHL players were in attendance at the Islanders’ development camp this year. Following his second season in the professional hockey ranks, forward Scott Eansor led the quartet in attendance. Forward Kieffer Bellows and defenceman David Quenneville also returned to the team’s development camps following their first year in the team’s organization.

Rounding out this year’s group of WHL attendees is another Portland Winterhawk in Reece Newkirk, a fifth-round selection of the Islanders at the 2019 NHL Draft.

“Experiencing what the coaches up here want in a practice and the work ethic and style of play. It’s really exciting. It’s going to be an exciting summer [before] coming back.” @BellowsKieffer pic.twitter.com/4AJfSJW2Uo

That’s a wrap! Thanks for a great #Isles Development Camp. 🙌🏻 See you in October! 😎 pic.twitter.com/S2GHVBQOBF

2019 draftee Reece Newkirk finds the back of the net! #Isles pic.twitter.com/NxlrUYK8mw

The Rangers had a trio of WHL players at their camp, with all three being fresh faces to the organization. The longest-affiliated of the three was Elmer, who signed a three-year, entry-level contract with the team in March 2019. Last month, the Rangers selected Robertson with the 49th pick in the 2019 NHL Draft, allowing the Oil King to realize his draft dreams. Rounding out the trio was Kemp, a former teammate of Robertson, who was invited to the team’s camp.

Having selected a player from the WHL for 13 consecutive NHL Drafts, talent from the league continued to be on display at the Flyers’ annual development camp. Represented by five players this year, the Flyers brought in forward Carsen Twarynski following his rookie season in the American Hockey League while also inviting forward Ben McCartney.

On the blue line, drafted defenceman Wyatte Wylie returned for his second camp while signed prospect Egor Zamula returned to the City of Brotherly Love as well. In net, the team’s latest draft pick from the WHL was on display as Roddy Ross attended his first camp with the Flyers.

Glued to the action. 👀 pic.twitter.com/aGDTKGZaUy

The Central Division was well represented at the Penguins’ development camp with all three skaters hailing from teams within the division. Hurricanes’ captain Bellerive, a signed prospect of the Penguins, and Addison, the Penguins’ top pick at the 2018 NHL Draft, were both in attendance. As a free agent invite, Oil Kings forward Josh Williams was invited to participate at the camp.

Moose Jaw Warriors forward Justin Almeida, a fifth-round selection of the Penguins in 2018, was one of three Penguins prospects who missed development camp due to summer rehabilitation.

Wonder what it's like to participate in a day of development camp? Take a look ⬇️ pic.twitter.com/VNEX387Tb9

Bellerive on watching Guentzel and Aston-Reese (players that made it on an NHL roster quickly): "Those guys are very inspirational… I'm doing everything I can. It'd be very cool for me to be a guy like that." pic.twitter.com/KiiDIK7s9S

Salt Bae would be proud. pic.twitter.com/WnP291UKuN

Up front, a pair of players from the team’s 2016 draft class, Garrett Pilon and Beck Malenstyn, attended the camp after spending the past season with the team’s AHL affiliate, the Hershey Bears. From the team’s 2017 NHL Draft class, Saskatoon Blades forward Kristian Røykås Marthinsen attended the Capitals’ camp once again. Two more forwards from the 2018 draft class, Riley Sutter and Eric Florchuk, also made an appearance while their two new forwards from the 2019 NHL Draft, Brett Leason and Aliaksei Protas, attended as well.

Having attended the team’s camp in 2018, goaltender Logan Thompson returned to the ice with the Capitals as a member of the organization after inking a one-year AHL contract with the Bears. Americans goaltender Beck Warm was an invite as a free agent.

Q: What happens when you give @Alexeyev04 a camera on the ice?
A: Chirp city 😂#ALLCAPS | #CapsDevCamp pic.twitter.com/o64lAgle2L

Great week of hockey and thanks to the fans for coming out to support our guys 🙌🏼 pic.twitter.com/axPhOptFl6